Temporal arteritis is a rare cause of a headache but one that I always worry about missing. I remember as an FY2 in GP land, my tutor running through an examination on how to exclude serious causes of a headache. She palpated the temporal arteries - and now, I always do too!

The superficial temporal artery is a branch of the external carotid artery. To test yourself on anatomy, I'd recommend the lumen website.  If you look at the anatomical pictures, the vessel I used to think about as the temporal artery is not - and the temporal artery is a lot higher and more posterior than I realise.
To remember the branches:
"Some Anatomists Like Fornication, Others Prefer S & M"
S - Superior Thyroid Artery
A - Ascending Pharyngeal Artery
L - Lingual Artery
F - Facial Artery
O - Occipital Artery
P - Posterior Auricular Artery
S - Superficial Temporal Artery
M - Maxillary Artery


PathophysiologyOnce again, the Calgary Guide summarises everything you need to know. It is important to remember that the acute phase reaction can cause both a fever, and raised inflammatory markers so a careful history and examination is needed - you're unlikely to be treating meningitis!

Clinical Presentation
Again, the Calgary Guide covers everything! Headache and scalp tenderness is the presenting symptom most people comment on, but don't forget jaw claudication and stroke or TIA like symptoms.

The American College of Rheumatology has criteria for diagnosing giant cell arteritis. These were written a long time ago in 1990, and as far as I can tell, haven't been updated! Diagnosis can be made if the patient has at least three of these criteria. This gives a sensitivity of 93.5% and a specificity of 91.2%.

1. Age at disease onset >=50 years
2. New headache
3. Temporal artery abnormality
Temporal artery tenderness to palpation or decreased pulsation, unrelated to arteriosclerosis of cervical arteries. I'm not sure how you prove it's unrelated to arteriosclerosis!
4. Elevated erythrocyte sedimentation rate
Erythrocyte sedimentation rate >=50 mm/hour. This happens in 95% of patients. CRP is often used instead, and one study suggests it is a more sensitive marker than ESR.
5. Abnormal artery biopsy.
The temporal artery biopsy may be normal in 42% to 61% of the patients.

Imaging
A normal colour duplex ultrasound of the temporal artery makes giant cell arteritis unlikely with a negative predictive value of greater than 95%.

Treatment
- Prednisolone 40 mg daily
(If sight affected 60mg if  just pmr 15mg)
- Temporal artery biopsy within two weeks.
- Reduce the dose after one to two months of treatment.
- 30% to 50% of patients can stop taking steroids after two years
- Remember bone protection. Bisphosphonates, calcium and vitamin d.
- PPI if on NSAID too - not if just on prednisolone.
- Rheumatology referral, especially if frequent relapses and patients are unable to reduce their dose of prednisolone to an acceptable level.

Prognosis
The symptoms of GCA should improve in one to two weeks. Symptoms of polymyalgia improve in 48 to 72 hours.

Polymyositis is most common in middle-aged women. It causes:
Pain and weakness in proximal muscles
A very elevated creatinine kinase.
Many patients with polymyositis have antinuclear antibodies. 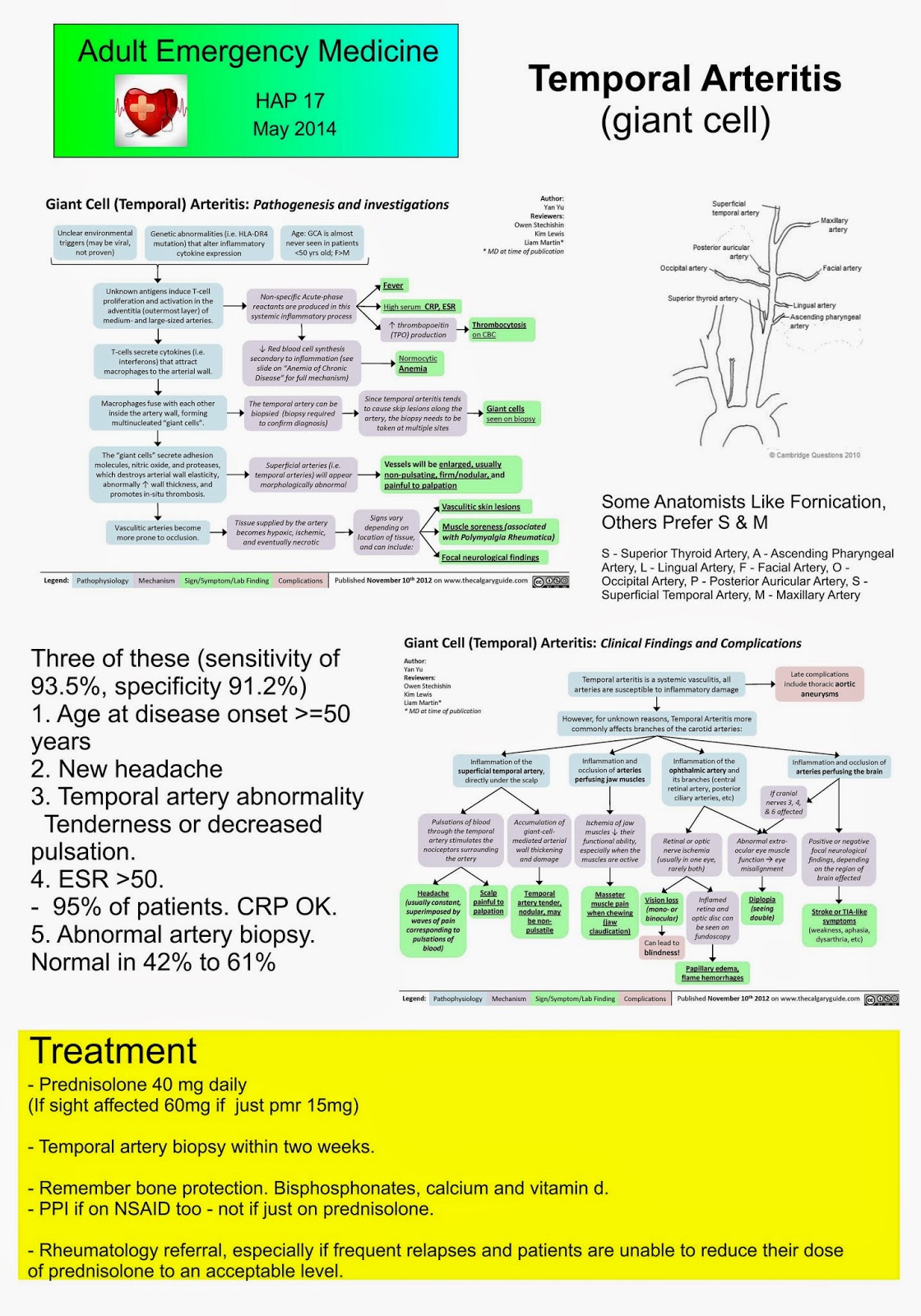 Posted by Cheerful Elephant at 05:53