SAH - the most feared cause of headache. Syncope + headache = think SAH.

Anatomy
Most SAHs occur in the circle of Willis - as this is where the brain gets its blood supply from. 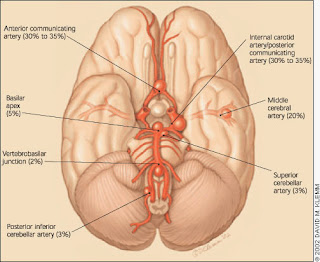 There are two types of aneurysm with slightly different pathophysiology behind them.
Saccular Aneurysms: Approximately 90%, with high morbidity and mortality. The internal elastic membrane weakens, at the site of vessel bifurcation where blood flow is most turbulent.

Fusiform Aneurysms: These develop from ectatic, tortuous cerebral arteries, most often in the vertebrobasilar system. Patients with fusiform aneurysms characteristically present with symptoms of cranial-nerve or brainstem compression, but the symptoms are not commonly associated with subarachnoid hemorrhage.

Epidemiology
Screening is not beneficial, even in those with first degree relative history. If screening is appropriate, cranial MRA is used.
Aneursyms:
NOT Congenital - increased risk if first degree relative has SAH
With 2 relatives, 10 year risk of 7.1% versus 0.8%
Occur in about 1 in 40 people (1-5%).
Most never rupture.
Multiple aneurysms in 30%.
Berry aneuryms have increased rate of formation in:
Autosomal dominant polycystic kidney disease
Pseudoxanthoma elasticum
Ehler-Danlos syndrome type IV.

SAH:
1-7% of all strokes.
More common in young men than young women
Overall, more common in women.
Aspirin increases the mortality if it bleeds

Diagnosis
Missed in 1/4 of patients as characteristic headache not present.
50% of patients rebleed within six months of the presentation
After that, 3% per year thereafter


Even in these patients, the possibility of having an intracranial aneurysm is low and screening all patients is not required in the absence of a positive family history. Cranial MRA is the imaging method of choice for screening.

Clinical Presentation - the Headache
Classically Instantaneous:
Instantaneous – 50%
2-60 seconds – 24%
1-5 minutes – 19%
No idea/unable to remember – 9%
1 hour has been suggested. The typical duration is of the order of 1-2 weeks.

Features
Pancephalic
Lateralised in one third of patients


Sentinel Bleed:
No medical attention sout, or one missed.
Present in 30 - 50%

The classic headache, caused by aneurysmal rupture, release of blood, and raised ICP, happens in 97% of patients. Only around 25% of patients who visit A&E with this sudden severe headache (so called, “the worst headache of my life”) have acute subarachnoid haemorrhage. In only 12% of them, headache is the only complaint.

Clinical Features - other
Vomiting is not predictive but present in 75%
Seizure at onset (74%)
Reduced level of consciousness in 2/3 of people
Transient loss of consciousness in 26%
Delirium (1%)
Focal neurology (15%)
3rd nerve palsy due to an aneurysm in the posterior communicating artery.
1 in 7 will have intraocular haemorrhages.
Ischaemic changes (of any type) on ECGare common
Neck stiffness may develop – but usually only after several hours and is due to an inflammatory reaction to the blood in the subarachnoid space, and it may not develop at all if there’s only a small amount of blood.

CT:
98% sensitivity if scanned within 12 hours of onset.
93% within 24 hours.
50% at 5 days – based on study from 1984.
Sensitivities unlikely to improve because small bleeds will be flushed away by normal CSF flow.   There may not be enough blood present to appear as hyperdense to CSF on scanning.


Angiography:
Cerebral angiography within 48-72 hours of the initial event.

Lumbar Puncture
1 in 10 of patients presenting with thunderclap headaches will have had a subarachnoid haemorrhage.
A non-contrast CT within 12 hours of onset of pain is 98% sensitive for detecting SAH.
Therefore the risk of missing a SAH may be as low as 2 in 1000 if the patient has had a negative CT in this timeframe.
Xanthochromia A fancy way of saying ‘Yellow colour’! - Bilirubin
96% sensitive if done 12 hours post headache
Positive for at least 2 weeks (possibly up to 4 weeks)

Treatment
Supportive care as appropriate
Neurosurgery - surgical clipping or coil
Treat seizures (occur in 18% of patients) with benzodizepines and load with phenytoin 18 mg/kg IV
Prevent vasospasm - Nimodipine
(calcium channel antagonist with some selectivity for cerebral circulation)
Lower the SBP to below 140 mm Hg to help reduce the risk of rebleeding using intravenous labetalol. Avoid
vasodilators, such as nitroglycerin and sodium nitroprusside, because they increase the intracranial blood    volume and intracranial pressure
If your patient is unconscious, you should not try to lower their blood pressure, at least temporarily

Anti-fibrinolytics, e.g. tranexamic acid
— controversial
— may reduce risk of re-bleed but increase risk of VTE
— some centers give until aneurysm is secured if no VTE risk factors, monitor for DVT

Treat fever - occurs in 70% of SAH and requires aggressive control. Look for and treat infection. Antipyretics.

3% will have a cardiac arrest. Aggressive resuscitation is essential as they appear to have a high rate of ROSC and half of the survivors will regain independent living. 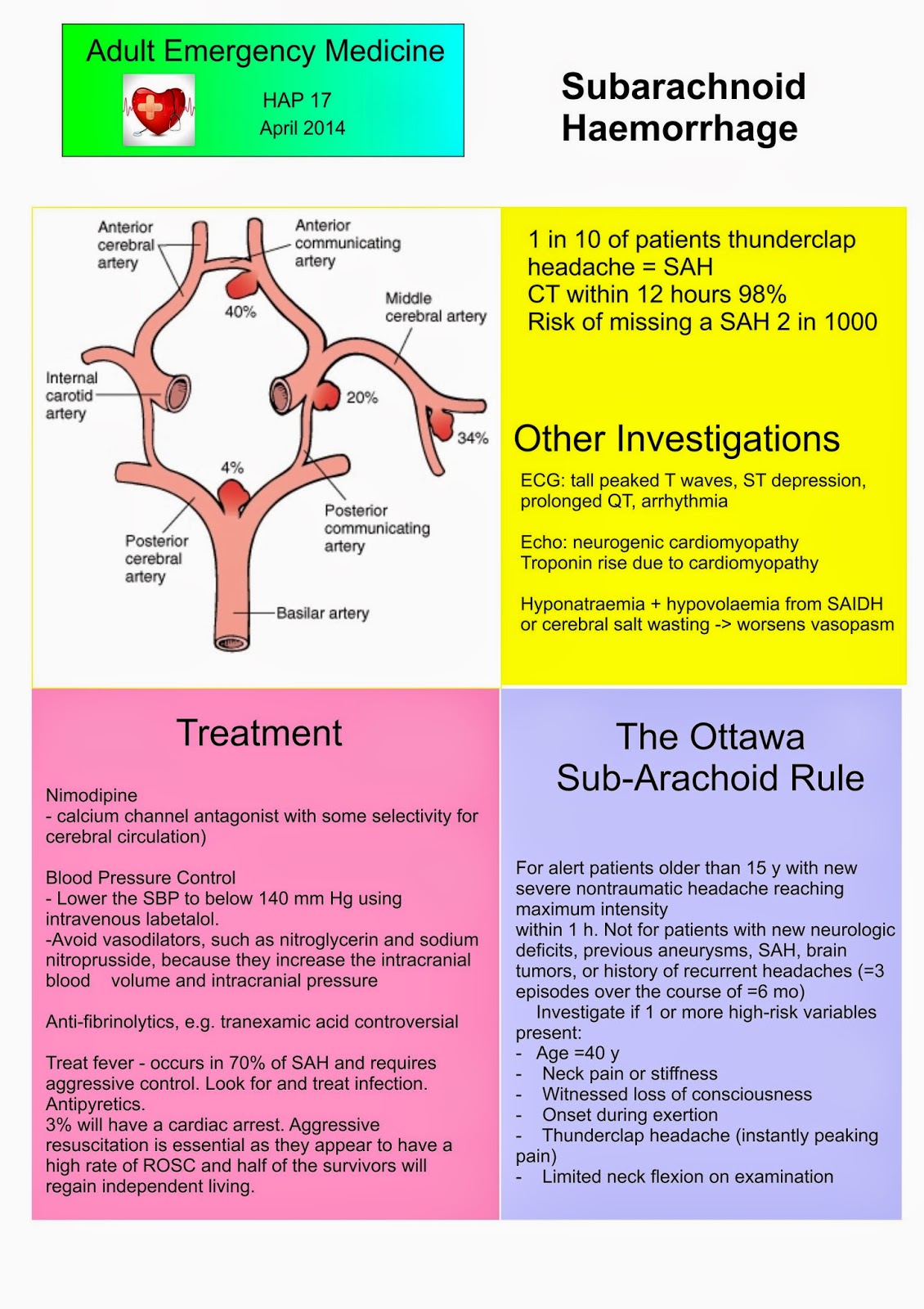