TIAs
Isolated vertigo is rare in posterior circulation TIAs. They may be hard to diagnose.

There is little benefit from further aspirin if patients are already on aspirin. If patients present late, they should be treated as lower risk of stroke.

For risk assessment, RCP guidelines say investigate all urgently without further risk stratification, and all patients need to be seen within 24hours. No imaging unless to exclude haemorrhage - in patients taking an anticoagulant.

Confusion, memory problems, faintless or syncope, generalised weakness or numbness and incontinence are NOT TIA symptoms.


Always assess the carotid as part of your TIA assessment.

Anterior and posterior circulations are linked by the posterior communicating arteries, forming the circle of Willis.

Malignant MCA infarcts cause a lot of brain oedema, which may lead to herniation and early death. Young patients are particularly at risk because they don't have any spare brain space. A decompressive hemicraniectomy may be considered if pre-stroke rankin <2, defects indicate MCA, NIHSS >15, not alert, signs on CT of at least 50% of the MCA. Refer to neurosurgery. Likely fatal, and early senior neurosurgical involvement is necessary.

Stroke Assessment
Consider a ROSIER score - negative score for LOC/ syncope or seizures, with positive for weakness, speech and visual fields.
NIH score
Perfusion scan if diagnosis in doubt, or >4 hours including wake up stroke

Hypertensive encephalopathy or nephropathy
Hypertensive cardiac failure/myocardial infarction
Aortic dissection
Pre-eclampsia/eclampsia
Intracerebral haemorrhage with systolic blood pressure over 200 mmHg.
In patients being considered for thrombolysis, a blood pressure target of less than 185/110 mmHg should be achieved

- ASPECT score to see if for thrombolysis - determined from CT findings >7 = thrombolyse. - Alteplase is the preferred option. 19/20 stay the same, 1/20 get worse.
- If on NOAC (not dabigatran) no thrombolysis. Consider if clotting normal.

- If need thrombectomy have thrombolysis first 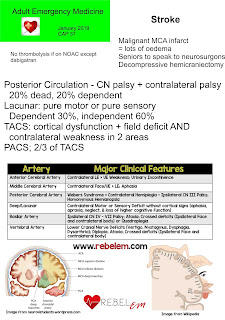 Posted by Cheerful Elephant at 11:45