Anaphylaxis is not common, but as prompt treatment is so essential we need to know about it. It's similar in children (covered here) and adults. 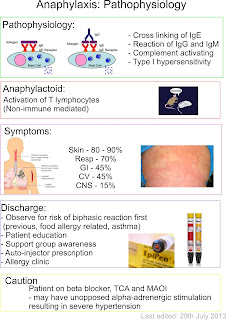 Biphasic response occurs in 20% - much debate now about whether or not we need to observe people.


Treatment
Resus Council Algorithm
- Bue needle to inject adrenaline – orange is too short.
- IM injection in the anterolateral aspect of the thigh is best – it is absorbed quicker here than in the deltoid.

- No evidence to support use of H1 antihistamines in anaphylaxis (Sheikh et al 2007). Some evidence of improved skin signs e.g. itching for less severe reactions. Important to remember they can also cause drowsiness, confusion, fatigue and dizziness as side effects.
- H2-antihistamines = no evidence to support their routine use in anaphylaxis (Nurmatov et al 2014). May provide some relief for less emergent skin symptoms.
- Steroids (glucocorticoids) = no evidence to support their routine use in anaphylaxis (Choo et al 2012). The primary reason for administration has been to prevent biphasic reactions (see below), however a recent paper by Grunau et al (2015) found they were not associated with decreased relapses within 7 days.

Investigations
Tryptase sensitivity is low – 21%, especially to foods. It's not recommended in children.
Check tryptase as soon as resuscitation has started, 1-2 hours after symptoms, 24 hours later or in convalescence (some people have raised baseline tryptase levels).

Hereditary Angioedema
Often doesn't respond to initial treatment. There's a good picture on RCEMLearning that shows how bradykinin is produced, both from ACE and oestrogen - and this can cause oedema.
Treat with concentrations of plasma and recombinant derived C1 inhibitor, or FFP if that isn't available.
Tranexamic acid may be helpful.

ACE Inhibitor
Excessive accumulation of bradykinin. Usually occurs soon after starting ACEi, but may be years later. Higher incidence amongst women, and African Americans.
It tends to be slowly evolving, with no urticarial or itching. Starts with focal, often asymmetric swelling.
Manage similar to C1 esterase inhibitor deficiency – give some FFP.

http://www.rcem.ac.uk/RCEM/Quality-Policy/Clinical_Standards_Guidance/College_Guidelines.aspx?WebsiteKey=b3d6bb2a-abba-44ed-b758-467776a958cd
Posted by Cheerful Elephant at 03:22