Asthma is really common and affects lots of people. It also causes lots of unnecessary deaths, and a lot of hospital attendances from asthma attacks. The 2014 asthma guidelines replace the word "exacerbation" with "attack" as it's easier to understand.
References for this summary will be at the end of part two. 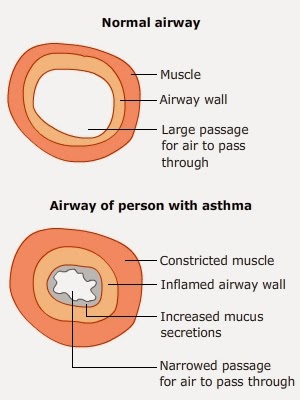 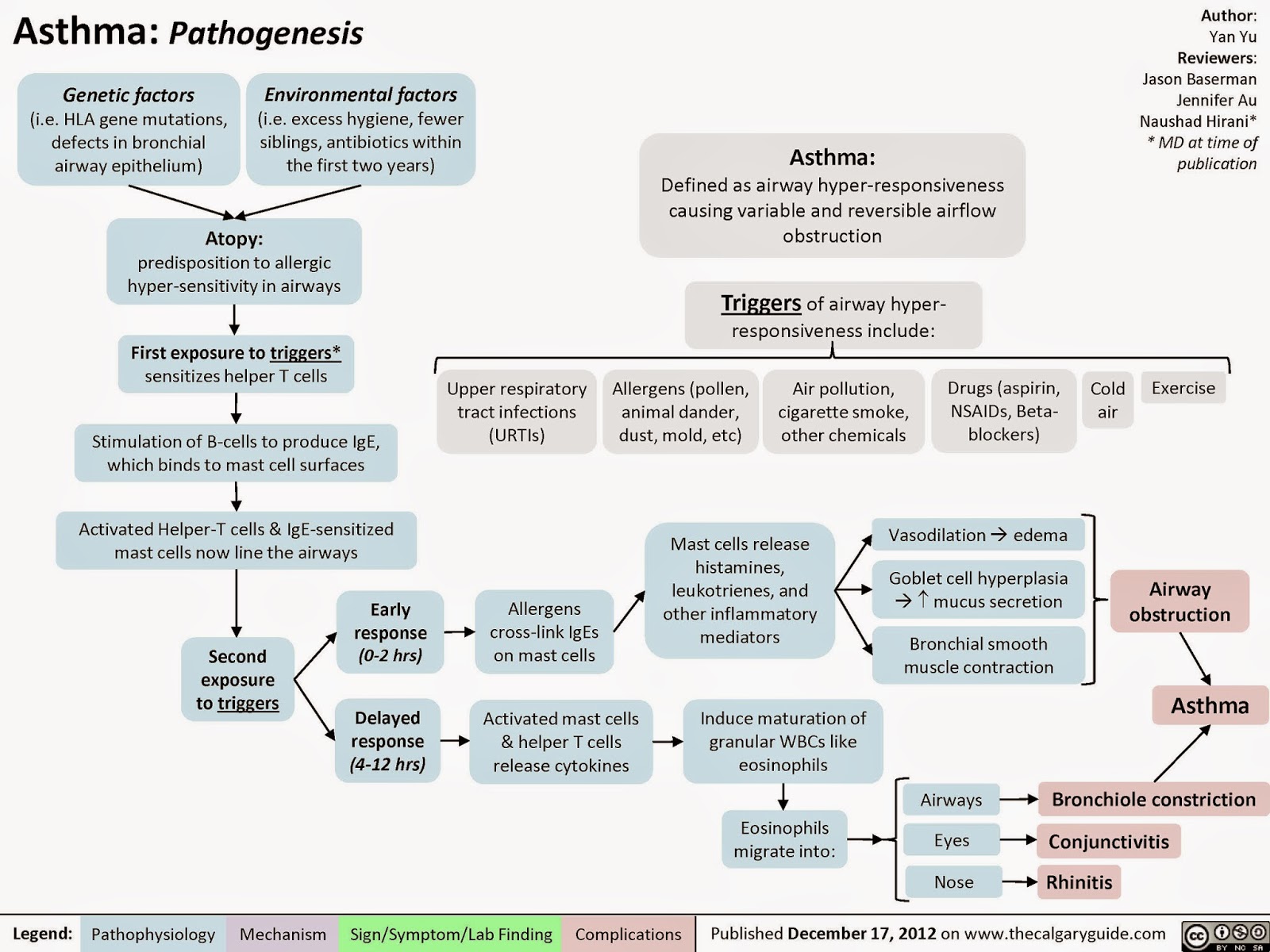 The Calgary Guide summarises it nicely here.
Asthma is defined as a chronic airway inflammatory disorder with airway hyper-responsiveness.

Asthma is an obstructive lung condition, caused essentially by an allergic reaction to a trigger. Like most reactions, there is exposure that sensitizes the helper T cells, then IgE is produced, mast cells - and then you get the response on the second and subsequent exposure. The release of histamines and leukotrienes causes vasodilation, increased mucus secretion and bronchial smooth muscles contraction. The reaction also causes eosinophils to migrate into the airways, eyes and nose causing conjunctivitis, rhinitis and bronchiole constriction. 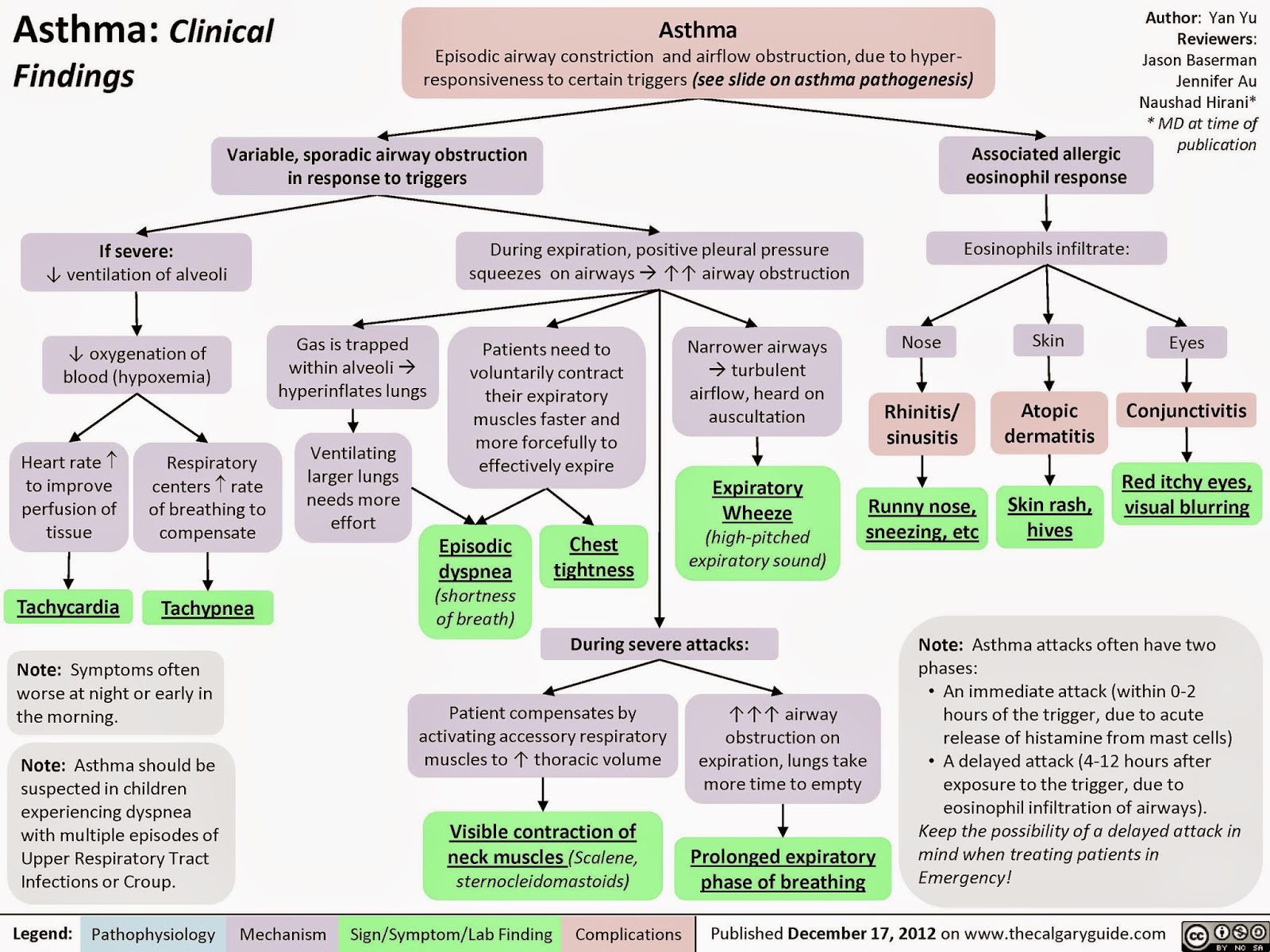 The Calgary Guide has a nice summary here. There's no thing that says with 100% certainty that this is asthma.

These features increase the probability of  asthma:
- >1 of  wheeze, cough, difficulty breathing, chest tightness
-  particularly if the symptoms:
are worse at night/early morning
occur in response to exercise, allergen exposure or cold air
are triggered by aspirin or beta-blockers
occur in the absence of a cold
- Personal or family history of atopic disorder or asthma
- Widespread wheeze on chest auscultation
- Otherwise unexplained low FEV1 or PEFR
- Otherwise unexplained peripheral blood eosinophilia

Grading Systems
The SIGN (and British Thoracic Society) guidelines use clinical symptoms to grade the severity of an attack in adults and children. The NICE guidelines appear to be based on the SIGN guidelines. 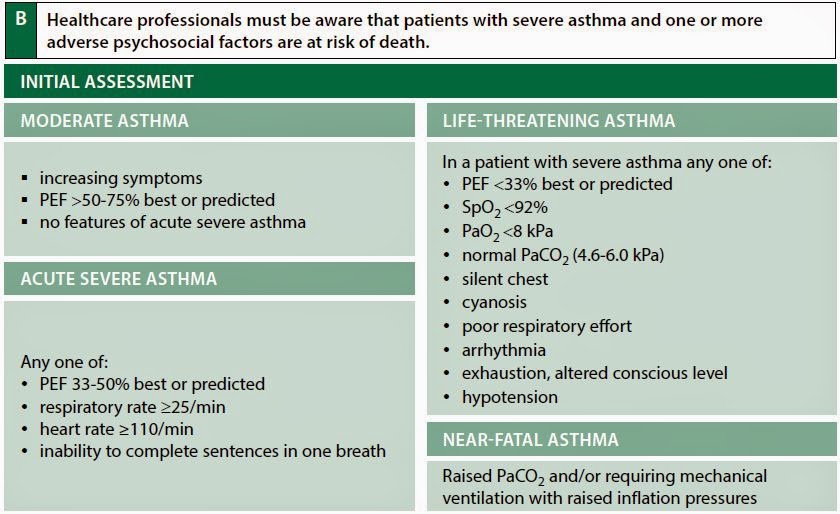 Systolic paradox (pulsus paradoxus), an historical marker of severity of asthma, is unhelpful and wastes valuable time so has been removed from the guidelines.

Features of patients at high risk of a life-threatening asthma attack:
Using a short-acting beta agonist inhaler more than once every four hours
Using more than one short-acting bronchodilator inhaler per month
Fewer than 12 prescriptions for preventer medication in the past year
Concurrent mental health problems

Investigations
Normally a clinical diagnosis, but if the patient has an intermediate probability of asthma, investigations can help. The Calgary guide has a summary. 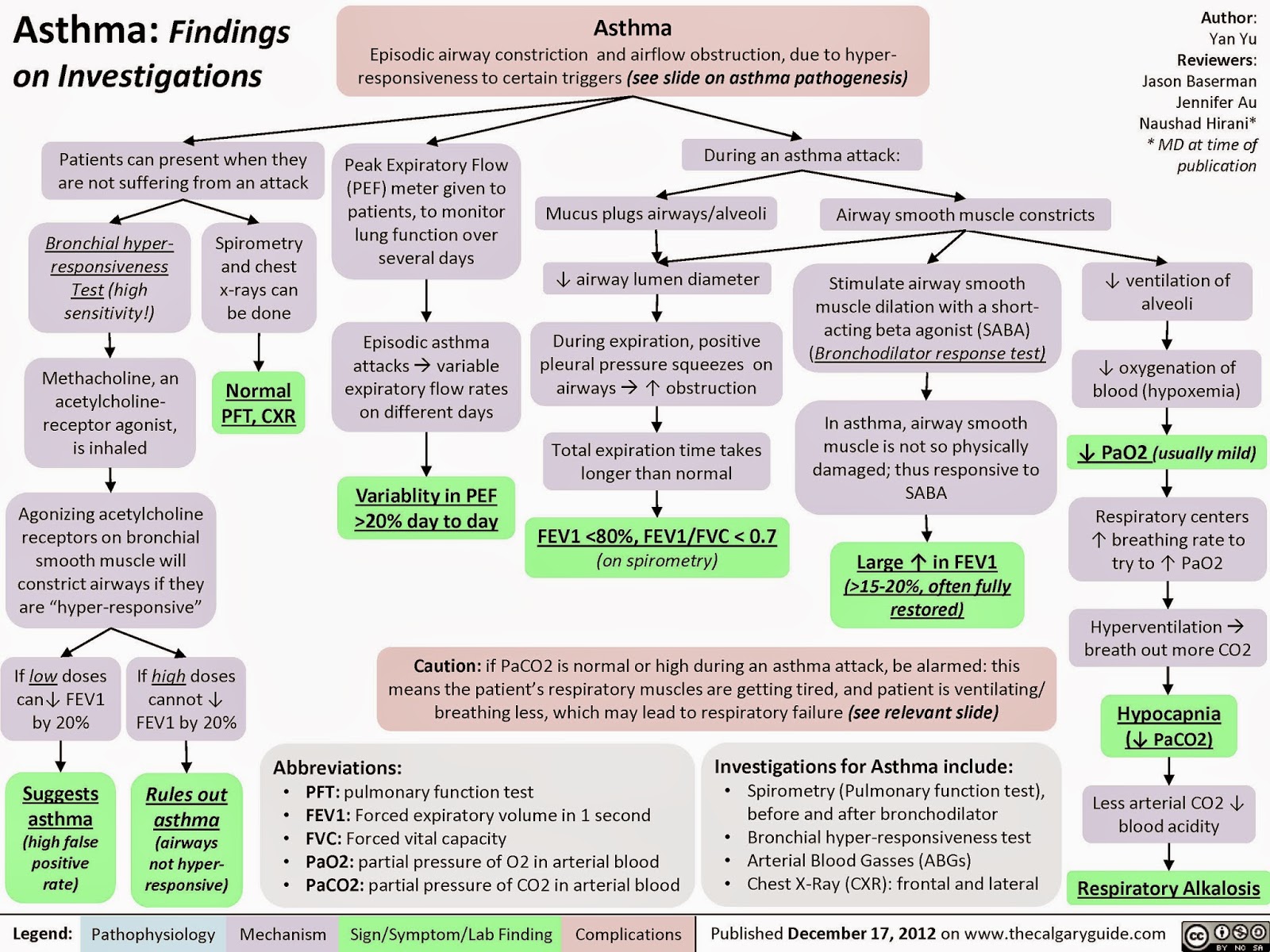 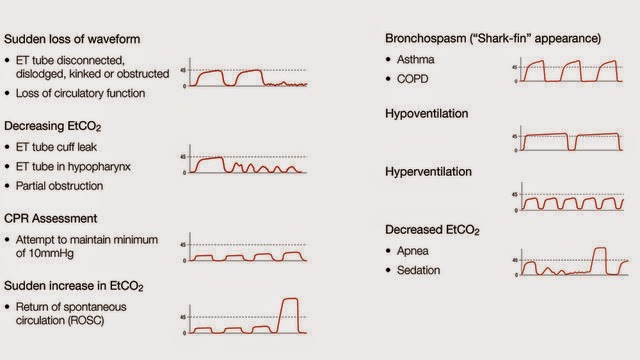 Wave form capnography should be used in acute exacerbations. Asthmatics get a "shark's fin" appearance because of the broncho-constriction. 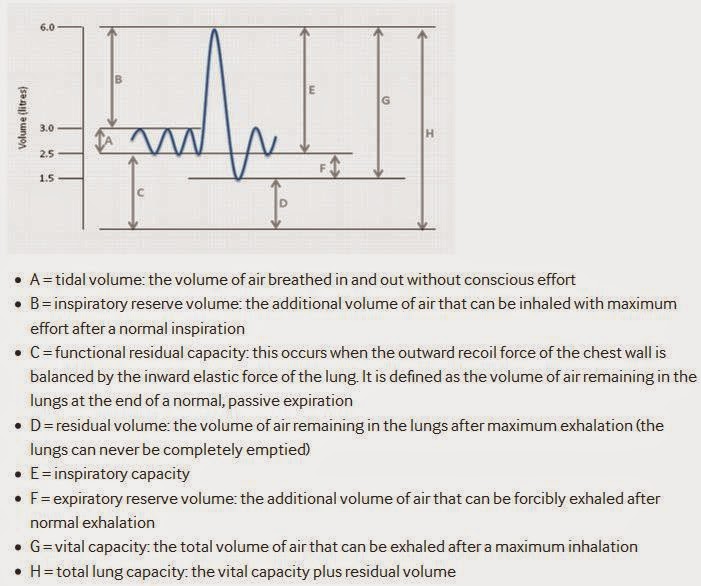 Mimics
• Churg-Strauss
Look for signs and symptoms of systemic vasculitis, such as fever, weight loss, fatigue, and malaise, Be suspicious if there is a persistent eosinophilia, positive ANCA, and multiorgan involvement.
• COPD

• Anaphylaxis
4% of asthma admissions to PICU almost certainly had anaphylaxis rather than asthma - so make sure you consider it.

• Gastro-oesophageal reflux
Consider a three month trial of PPIs, as investigations to formally diagnose this are very invasive.

Occupational Asthma
Occupational factors probably account for 1 in 6 cases of asthma. It is more likely to develop in the first year of exposure and is often preceeded by work related rhinitis. Symptoms should improve away from work. If suspected, a referral to someone specialising in occupational asthma should be made.
Compensation for occupational asthma is a complex area but The Citizens Advice Bureau may offer advice about their eligibility for benefits and compensation. 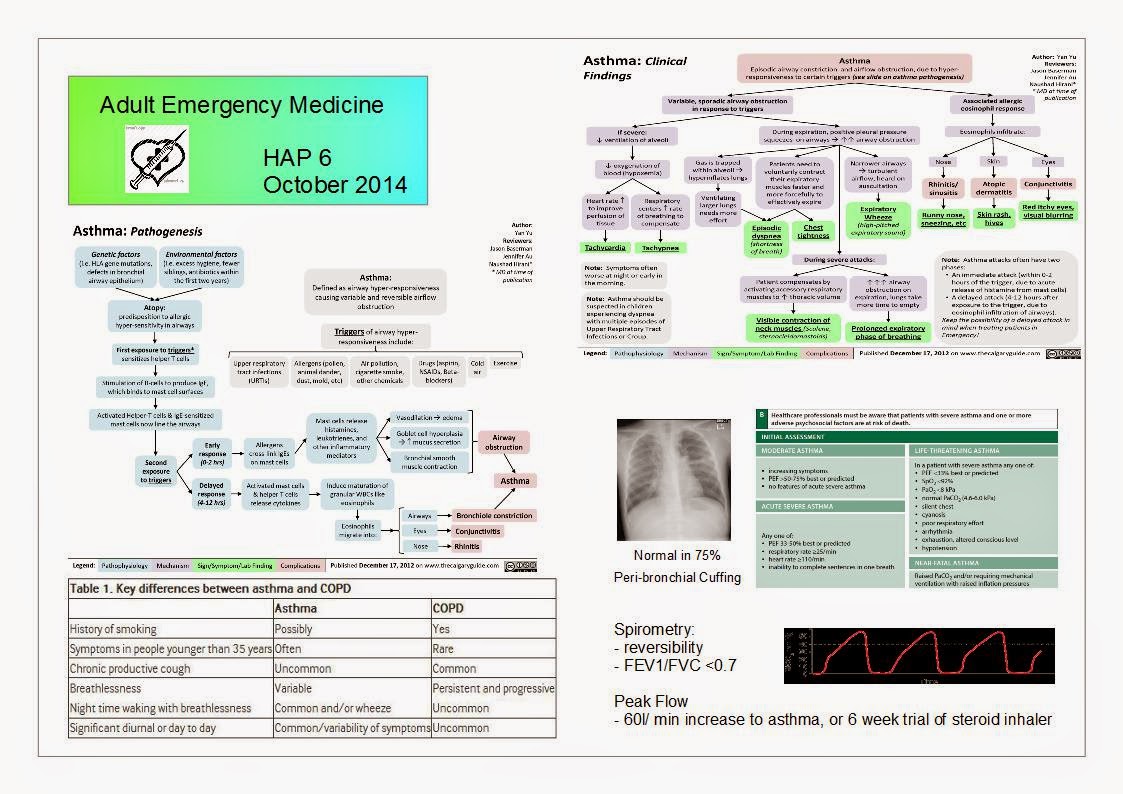 Posted by Cheerful Elephant at 05:07