PEs are the big diagnosis that we never want to miss, but we haven't yet decided the significance of all these tiny PEs we're picking up. 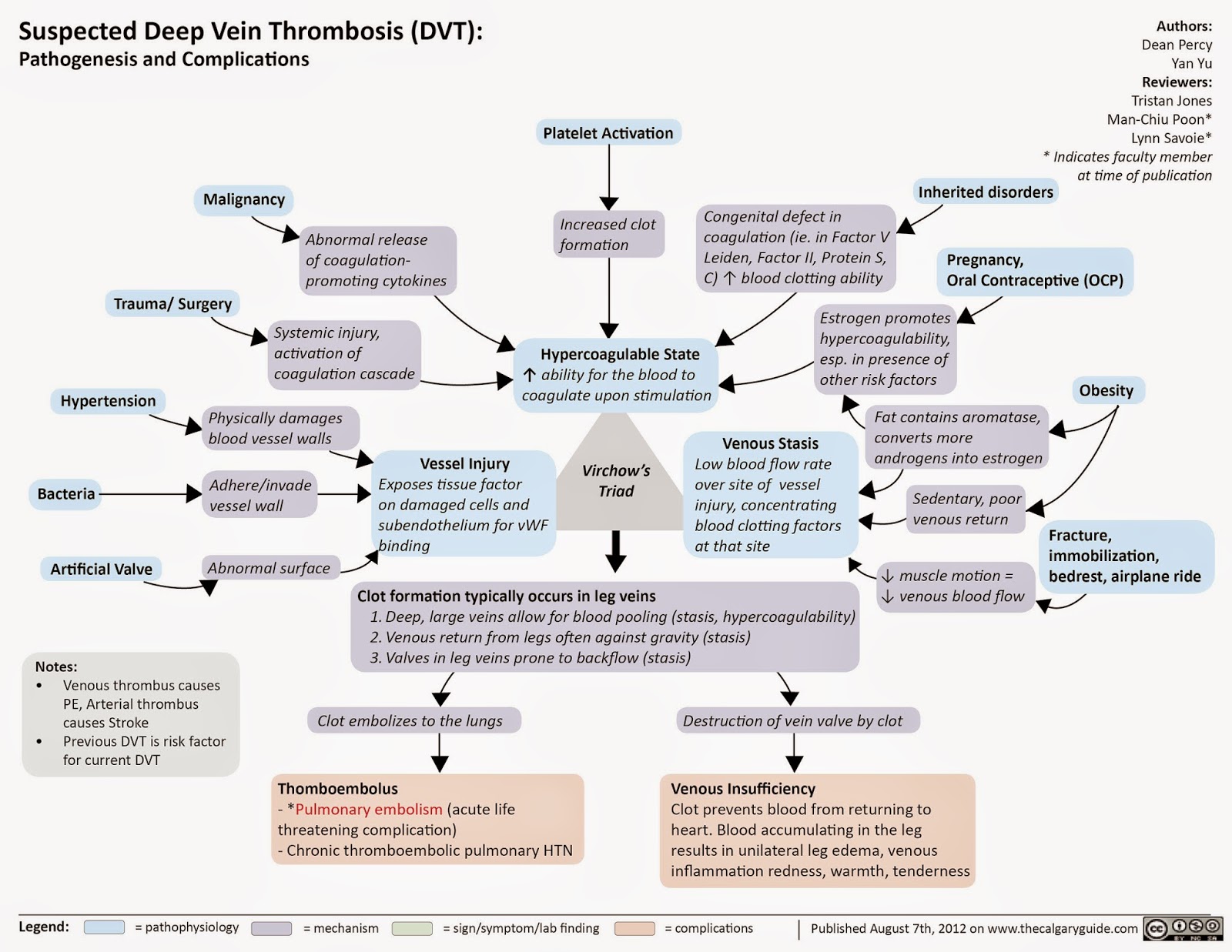 *    Inherited thrombophilias -  need to interact with an additional risk factor to cause venous thromboembolism. 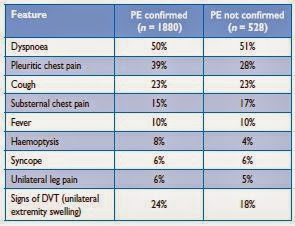 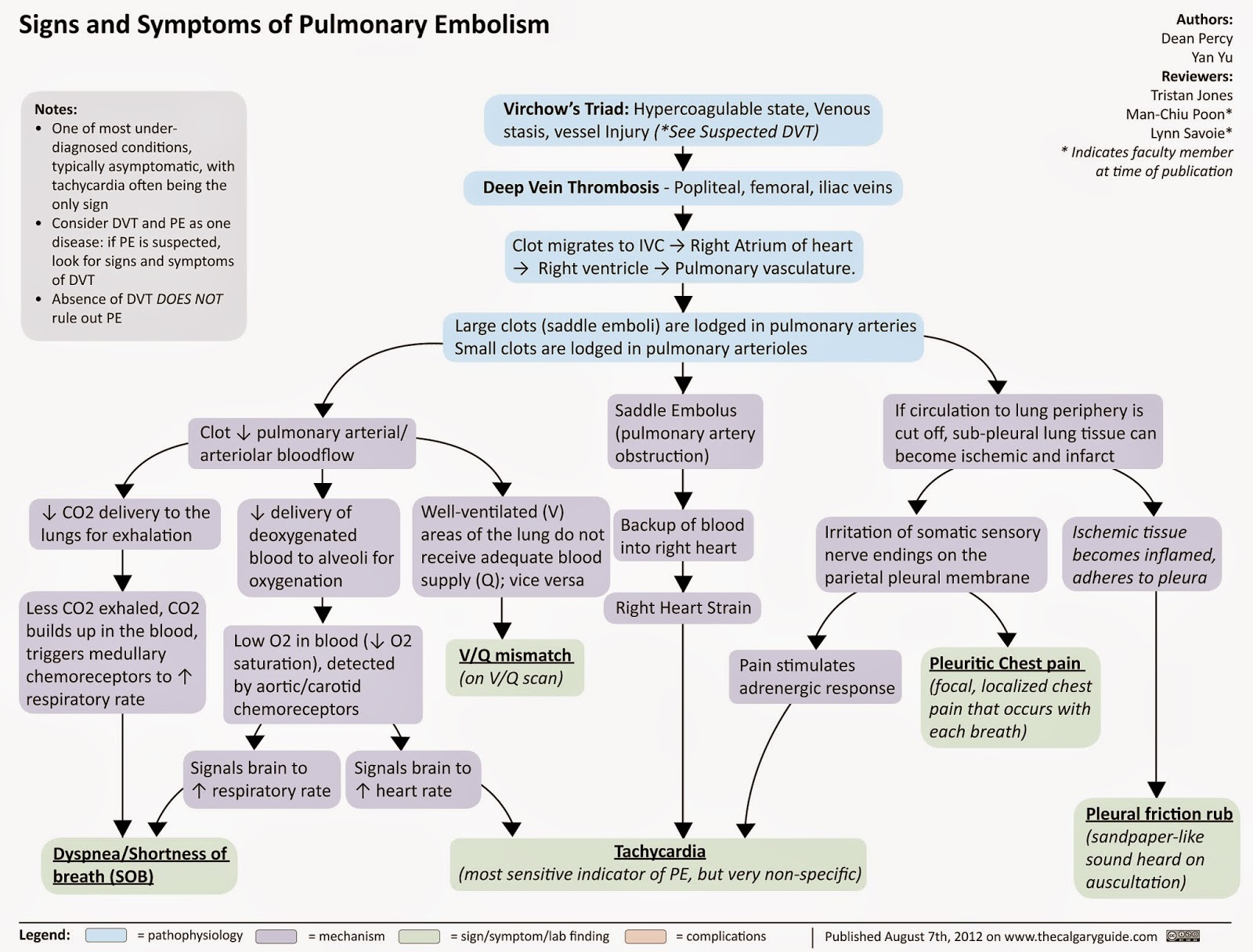 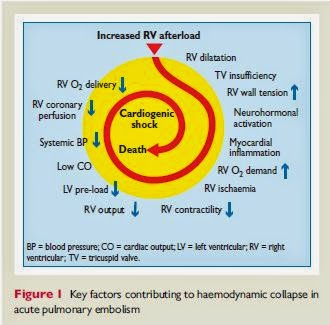 -    New onset AF and chest wall pain
-    Prominent JVP “a” waves
-    Right heart failure
-    Pulmonary area murmur
May be completely normal, but tachycardia (classically with a loud P2 and splitting of the second heart sound) with tachypnoea are common
-    Signs of a deep vein thrombosis are present in about 25%

Pregnancy
The diagnosis can be difficult to make in women who are pregnant. The standard pre-test clinical probability score should be used, recognising that pregnancy is a major risk factor for venous thromboembolism. The D-dimer test is of no use in this situation because it is raised (in the absence of PE) from about six weeks' gestation, until about three months post-partum.
The risk of pulmonary embolism increases throughout pregnancy, with more pulmonary emboli occurring after delivery than before. The risk of pulmonary embolism in pregnancy increases with maternal age and multiple births.
Pregnancy women normally have a mild compensated respiratory alkalosis.
Penicillins and cefalosporins safe in pregnancy. Avoid co-amox.

Amniotic fluid embolism is typically associated with rapid changes in coagulation and evidence of DIC. PE does not cause such changes. 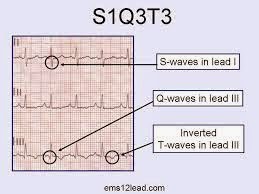 Submassive PE: Acute PE without systemic hypotension (SBP = 90 mmHg) but with either:
*    RV dysfunction (of at least 1 of the following):
- RV dilation
- BNP > 90 pg/mL
- N-terminal pro-BNP > 500 pg/mL
- ECG changes: New complete or incomplete right BBB, anteroseptal ST elevation or depression, or anteroseptal T-wave inversion
•     Myocardial necrosis is defined as either of the following:
- Troponin I > 0.4 ng/mL, or
- Troponin T > 0.1 ng/mL

Low Risk PE: Acute PE and the absence of the clinical markers of adverse prognosis
that define massive or sub-massive PE.

Scoring Systems
The original ‘PERC’ study excluded patients:
*    patients in whom shortness of breath is not the most important, or equally most important, presenting complaint
*    cancer
*    thrombophilia or strong FHx
*    beta blockers that may mask tachycardia
*    transient tachycardia
*    patients with amputations
*    massively obese and in whom leg swelling cannot be reliably ascertained
*    baseline hypoxemia 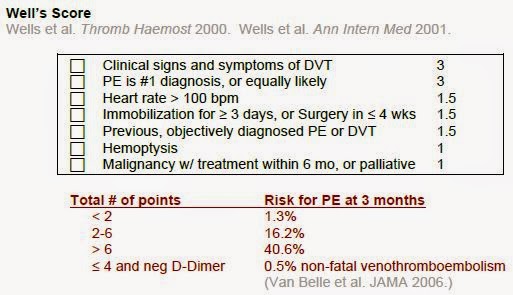 Anticoagulation for three or six months for a first idiopathic pulmonary embolism. A British Thoracic Society trial comparing three and six months' treatment is ongoing. Some trusts use PESI  to work out whether outpatient anticoagulation is suitable. 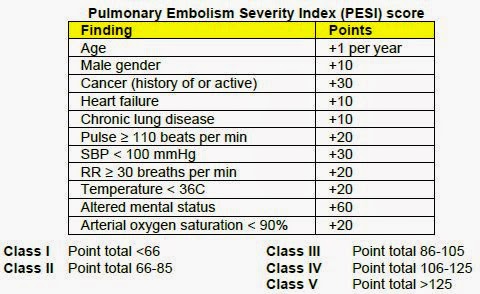 Flight prophylaxis. Current British guidelines suggest considering aspirin or LMWH, or formal anticoagulation for those at high risk of pulmonary embolism. Limited evidence to support this. Compression stockings may be beneficial. 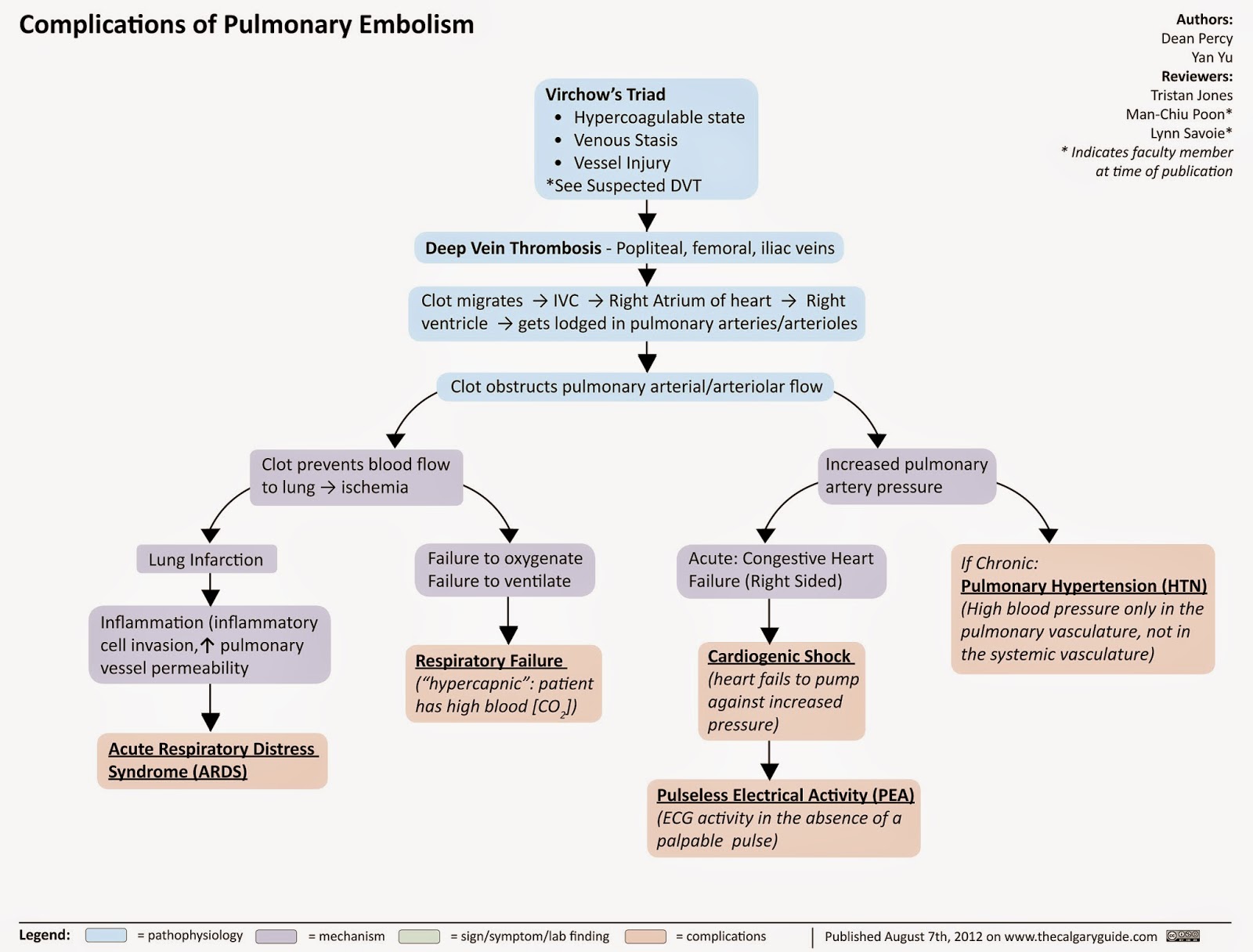 Treatment is by lying the patient on their right side, with head down and feet up, to allow air to collect and stay at the cardiac apex. From here it can be aspirated. This may be done by ultrasound guided needle aspiration.

Fat embolism
This occurs in association with long bone fractures, with bone marrow fat droplets released into the venous circulation at fracture. It is more common in non-immobilised fractures.

It typically presents with:
Hypoxia
Coagulopathy
Transient petechial rash on neck, axillae, and skin folds
Neurological disturbance, such as confusion.
Fat globules can be identified in the urine.
Treatment is supportive. 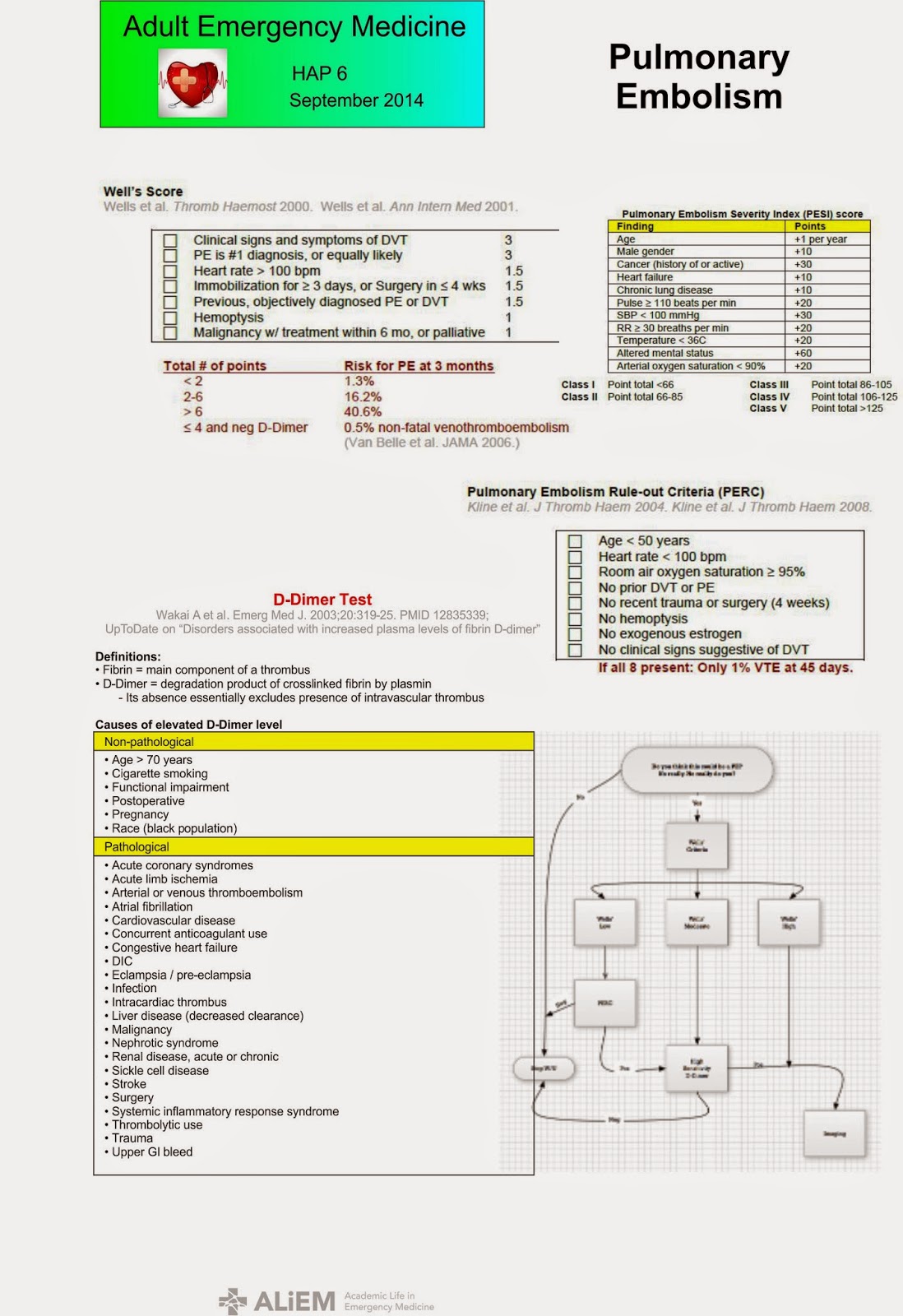 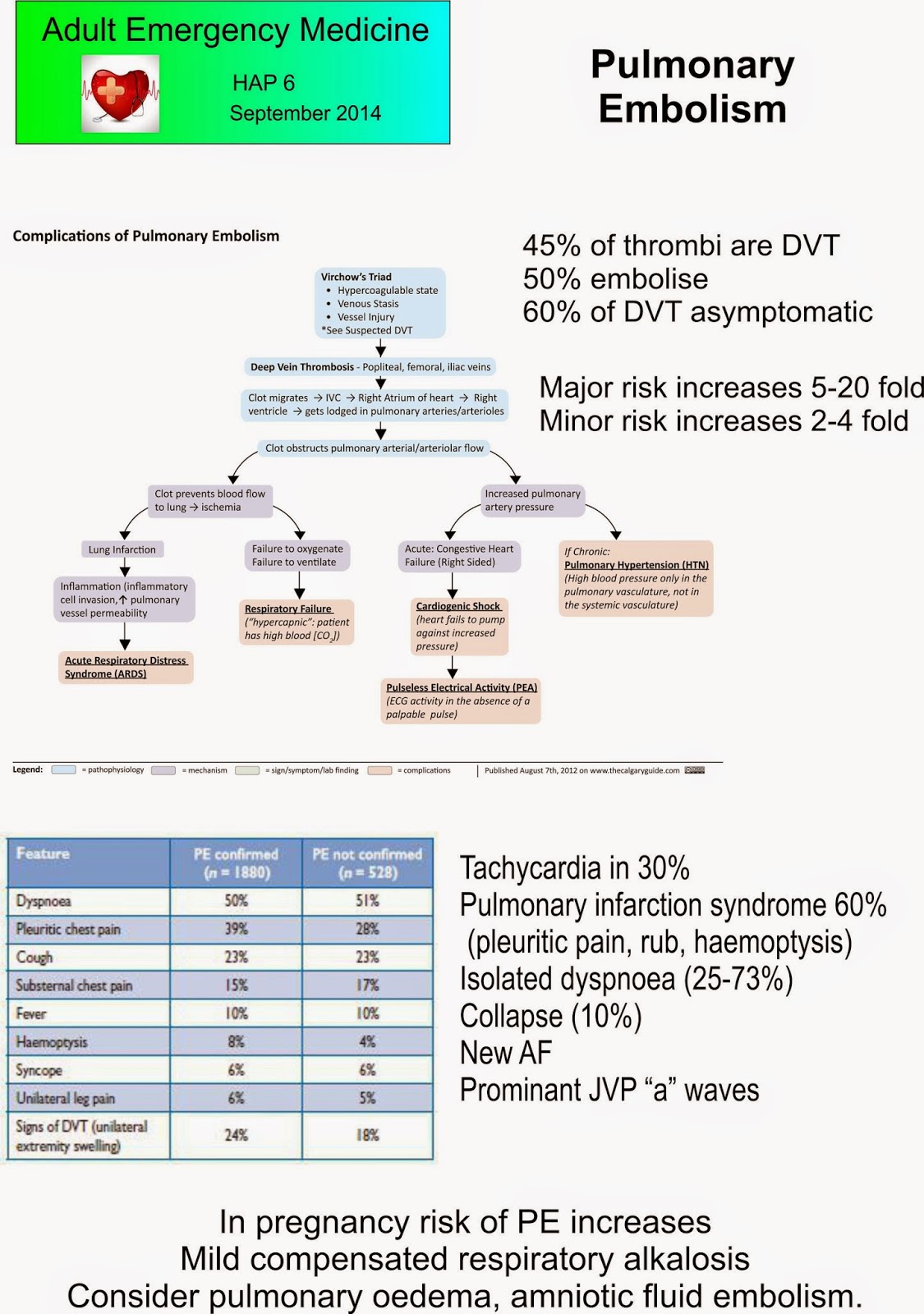 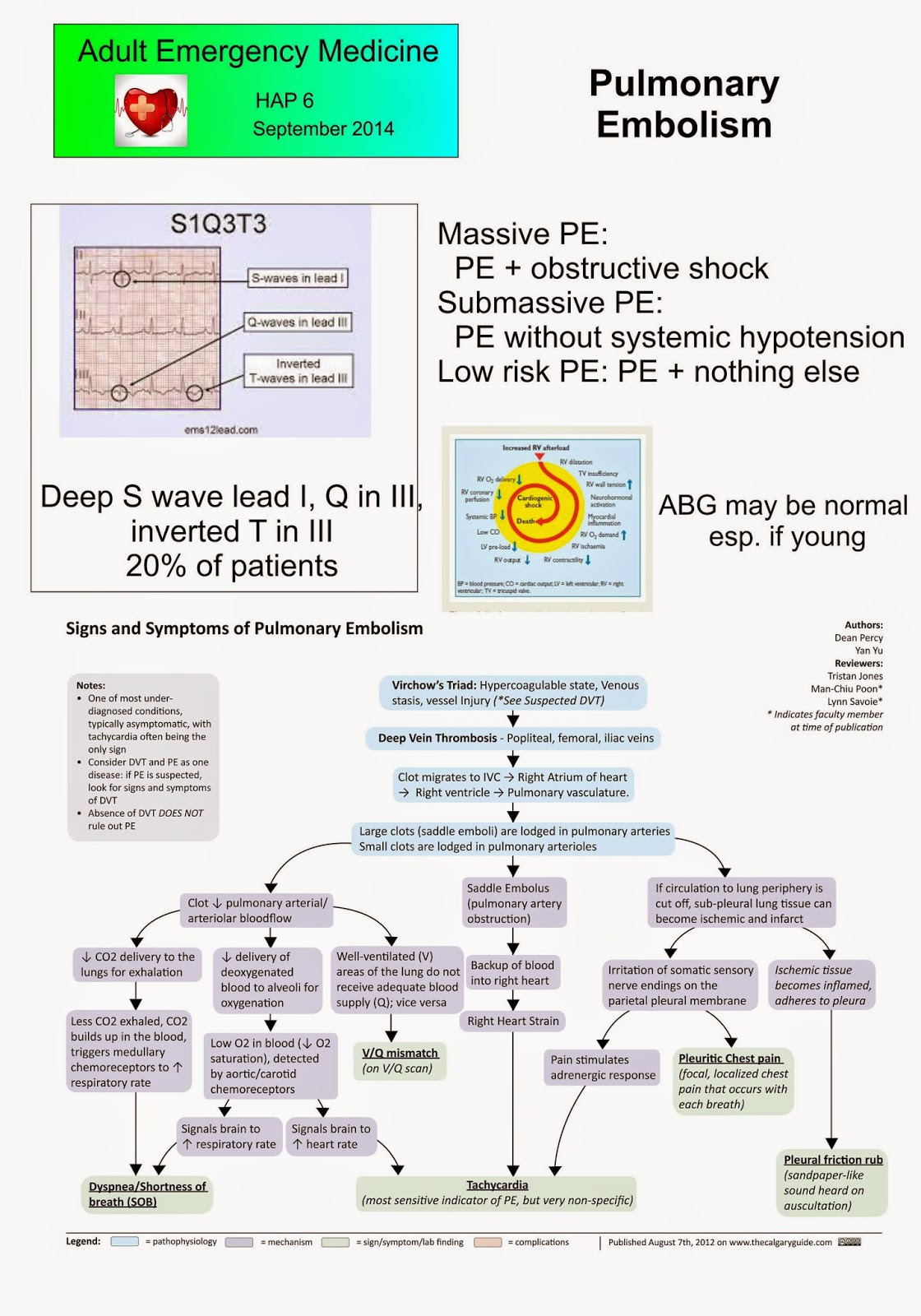