1. Atrial Tachycardias
This is a rare paroxysmal tachycardia with abnormal p waves, having a rate of 130 to 140 beats a minute. It has an abrupt onset and termination, and it can be initiated with programmed electrical stimulation during an electrophysiology study. Normally benign and short lived condition of the elderly.

Atrial tachycardias may cause a dilated cardiomyopathy and heart failure if they are not treated.

Treat with a DC shock.

2. Junctional Tachycardia
These arise from the "junction" in between the atria and the ventricles. Conduction to the ventricles is still normal, but there are more conduction pathways than there should be. P waves are often buried in the QRS.


Atrioventricular nodal re-entry tachyarrhythmias
These are more common in women and are responsible for approximately 60% of narrow complex tachycardias. This arrhythmia occurs when there are two atrial conduction paths into the AV node which triggers a perpetual circuit.
In nodal re-entry tachycardias, atrial (retrograde) and ventricular depolarisation is simultaneous so the p waves are buried in the QRS and hard to identify – look for inverted p waves in inferior leads II, III, AVF, sometimes causing a ‘pseudo’ S wave.

There are normally two paths in the AV node causing this. One of these transmits things quickly (retrograde) and one transmits things slowly (usually antegrade). Atrial and ventricular depolarisation is simultaneous.


AV reentry tachycardia
In re-entry tachycardias there is an extra connection between the atria and the ventricles - not more than one pathway in the node. Wolff-Parkinson White syndrome is the best known cause of this, and the accessory pathway is the bundle of Kent.

Wolff-Parkinson White
In sinus rhythm, the ventricles are normally excited by the accessory pathway. This leads to the clinical features of WPW - short PR and slurred upstroke of QRS (delta wave). 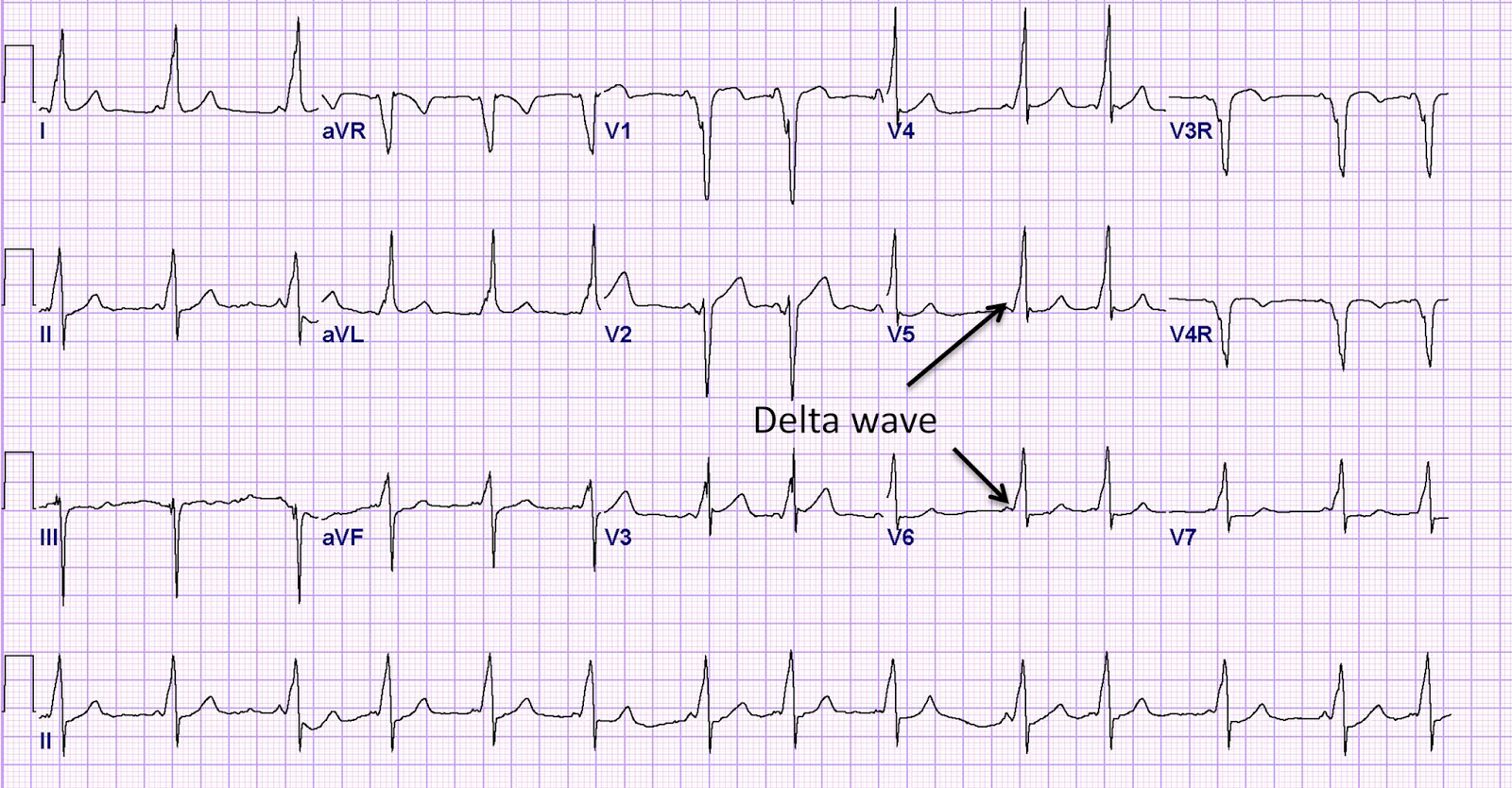 Patients may present with syncope, rather than palpitations, when atrial arrhythmias are conducted rapidly over the accessory pathway to the ventricles, bypassing the AV node and resulting in haemodynamic collapse.
For those patients with evidence of ventricular pre-excitation and a delta wave on their ECG, you can use the ECG to find the approximate location of the accessory pathway. Theoretically. you can localise it to the left or right side of the heart by assessing the polarity of the delta wave in lead V1, although how this helps you acutely I'm not sure:

Conduction may be orthodromic or antidromic 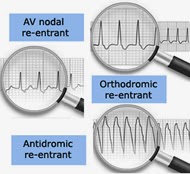 Orthodromic - anterograde conduction - premature atrial impulse is transmitted via the AV antegradely to the ventricles, then retrogradely back up the accessory pathway, depolarising the atria then passing back via the AV node and down the Bundle of His again antegradely, establishing a re-entry circuit.

P waves are present, but inverted and will follow the QRS, and the delta wave disappears.


Antidromic - anterograde ventricular activation occurs via the accessory pathway and retrograde atrial activation via the AV node. This causes a regular broad QRS tachycardia but is much less common and occurs in 10% of cases.
Retrograde conduction through the AV node leads to atrial depolarisation and consequently the P waves will be buried in the wide and abnormal shape QRS – this may be indistinguishable from ventricular tachycardia unless a previous ECG is available. One clue is that the re-entry tachycardia will be exactly regular. For more details on this, look at the VT page.

3. Atrial Flutter
This is covered on the AF page.


- Dipyridamole enhances the effect of adenosine.
- May need more adenosine if recently had caffeine.
- In pregnancy adenosine is OK


- Once the arrhythmia has terminated you should start the patient on an AV nodal blocking drug, such as a beta blocker or calcium channel blocker at a low dose. This will need to be continued long term in order to reduce the risk of recurrence of the arrhythmia

- Verapamil is contraindicated in patients receiving beta-blocker therapy.
Some sources advocate using verapamil first line instead of adenosine, as it is better tolerated.
Verapamil 5- 10mg IV over 3min.

http://learning.bmj.com/learning/modules/flow/JIT.html?execution=e2s2&locale=en_GB&action=start&sessionTimeoutInMin=90&moduleId=5003248&status=LIVE&_flowId=JIT&page=1
Posted by Cheerful Elephant at 13:56