Syncope Overview and the ECG in the Athlete

My attempt to cover all of the curriculum in ST4/ST5, ready to revise in ST6 is doomed to failure. I'm going to set myself the target of the compulsory topics by the end of ST4-  that's a bit more achievable. I'll hope to do more than just compulsory. Luckily, HAP5 is one of the ST4 topics! 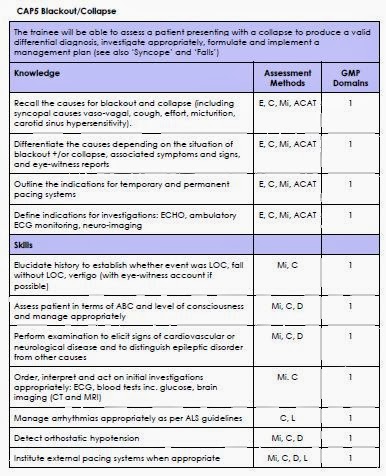 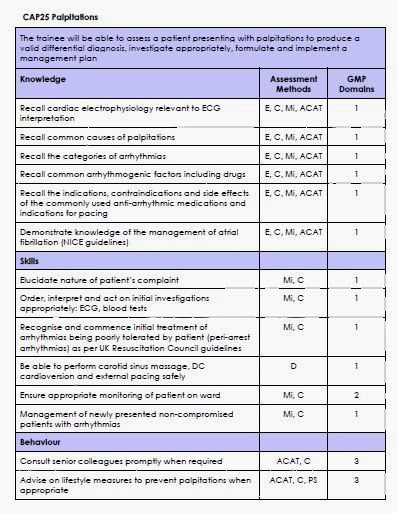 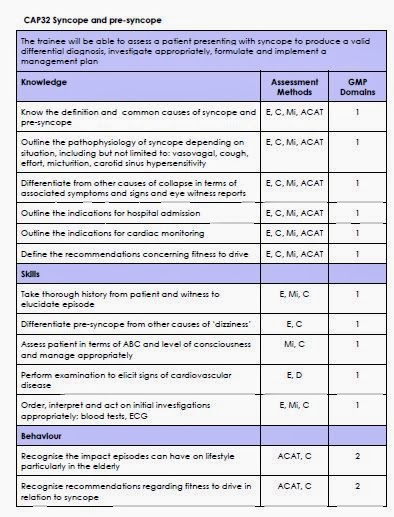 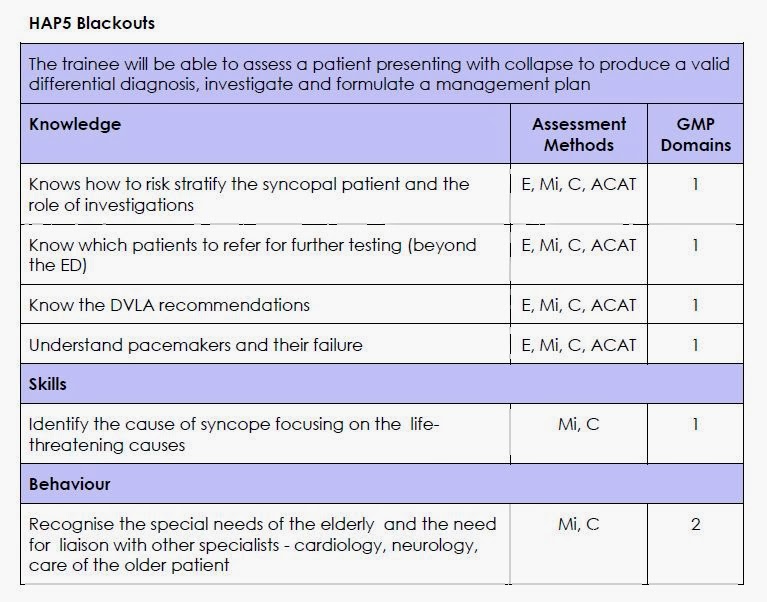 Other
BMJ
ECGs in Athletes
ECG in a Marathon Runner

Junctional (nodal) rhythm: QRS rate is faster than the resting P wave rate which is slowed in athletes due to increased vagal tone. This is normal in a trained athlete.


Premature Ventricular Contractions: LBBB morphology suggests an origin from the right ventricle. The presence of 2 or more PVCs on a 10 second tracing is abnormal and requires additional testing.

Left Ventricular Hypertrophy:
Sokolow-Lyon voltage criterion: sum of the S wave in V1 and the R wave in V5 or V6 (using the largest R wave) as >3.5 mV (35 small squares with a standard amplification of the ECG at 10 mm/1 mV).
LVH in athletes is normal but other features in conjunction with it, like left atrial enlargement, left axis deviation, ST segment depression, T wave inversion, or pathologic Q waves, should raise the possibility of pathologic LVH and should prompt further evaluation.

Incomplete Right Bundle Branch Block: rSR’ pattern in V1 with QRS duration <120 ms is commonly present in athletes (12-32%.
May be easily confused with a Brugada pattern.


Early Repolarisation: 35-91% of trained athletes and is more prevalent in young males and black/Afro-Caribbean individuals. Late QRS slurring or notching with horizontal ST segment elevation in the inferolateral leads has been associated with an increased risk of arrhythmic death in one study of middle aged, non-athletic Finnish citizens. However, a significant percentage of young competitive athletes (25-30%) show early repolarisation with similar morphologic features in either the inferior or lateral leads.

An accurate assessment of the QTc can be achieved by adhering to the following six principles.
1.  Bazett’s heart rate correction formula
(QTc = QT/√RR; note the RR interval is measured in seconds).

2.  Bazett’s formula loses accuracy at slow heart rates and can underestimate the individual’s inherent QTc at heart rates <60 bpm, especially at heart rates <50 bpm.
3.  In sinus arrhythmia calculate an average QT interval.
4.  Identifying the end of the T wave properly.
5.  It is incorrect to include the commonly seen low amplitude U wave in the QT calculation. Such U wave inclusion will inflate greatly the QTc. Instead, follow the “Teach-the-Tangent” or “Avoid-the-Tail” method as shown in Figure 4. 6.  The morphology of the T waves, not just the length of the QT interval, can suggest the presence of a QT syndrome. A notched T wave in the lateral precordial leads may be a tip off to LQTS even in the absence of overt QT prolongation.

LQTS is estimated to affect 1 in 2000 individuals. SQTS is much less common affecting less than 1 in 10000 individuals.LQTS is the most common channelopathy responsible for about 15-20% of SUD and is diagnosed based on a combination of symptoms, family history, electrocardiographic findings, and genetic testing. The Schwartz-Moss score is used to invoke low, intermediate, and high probability for LQTS.
Genetic testing is recommended for:
1) any patient where a cardiologist has an index of suspicion for LQTS (intermediate or high probability score), or
2) an asymptomatic patient with no family history but an incidental ECG finding with a QTc >480 ms pre-puberty and >500 ms post-puberty that is confirmed on repeat ECG testing.
Genetic testing may be considered for individuals with an incidental QTc finding (repeated) of > 460 ms pre-puberty and >480 ms post-puberty.

Guidelines from the European Society of Cardiology for ECG interpretation in athletes define a QTc value of >440 ms in males and >460 ms in females (but <500 ms) as a ‘grey zone’ requiring further evaluation, and a QTc ≥500 ms, otherwise unexplained and regardless of family history and symptoms, as indicative of unequivocal LQTS.

HOCM
Symptoms of HCM (autosomal dominant) include chest pain, syncope, and exercise intolerance, but for many persons the disease can be asymptomatic and SCD may be the clinical presentation of the disease. However, the reported prevalence of HCM in competitive athletes is apparently lower, approximately 1 in 1,000 to 1 in 1,500 athletes.

The isolated presence of high QRS voltages fulfilling voltage criterion for LVH is regarded as a normal finding in athletes related to physiologic increases in cardiac chamber size and/or wall thickness and does not in itself require additional evaluation.


Ventricular fibrillation and sudden death in patients with Brugada syndrome occurs more commonly during rest and sleep and is unrelated to exercise.

CPVT should be considered in any person who experiences syncope during exercise or extreme emotion, particularly in those who experience syncope during maximal exertion or have repeated episodes of syncope with exercise. CPVT cannot be diagnosed on the basis of a resting ECG, as the resting ECG is normal. An echocardiogram is also typically normal. As ventricular ectopy occurs only in the face of increased emotion or exercise, exercise stress testing is the key test in the evaluation CPVT. As exercise workload increases, there is typically an increase in the amount of ventricular ectopy which ultimately may result in polymorphic ventricular tachycardia (Figure 7). 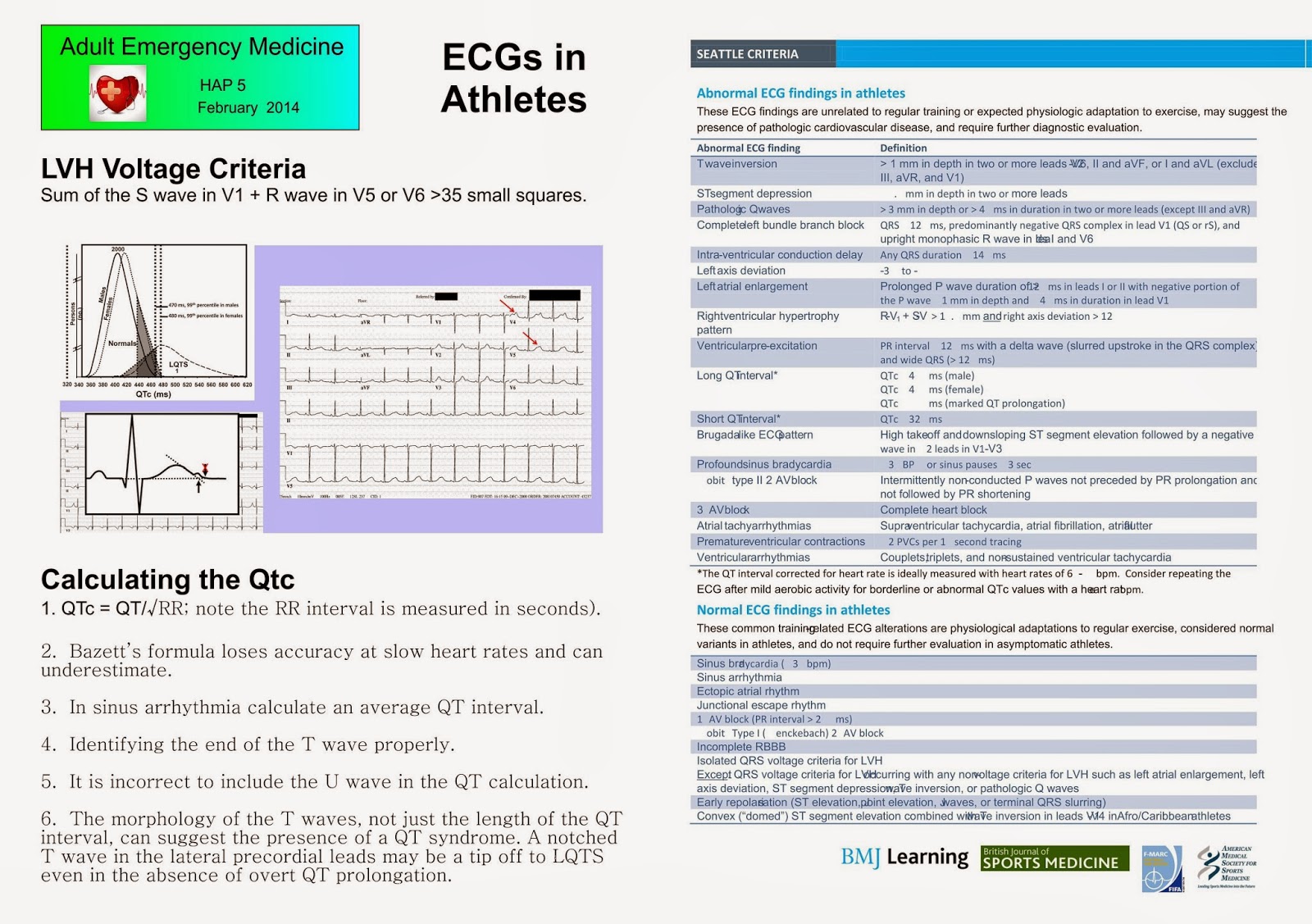 Posted by Cheerful Elephant at 13:22