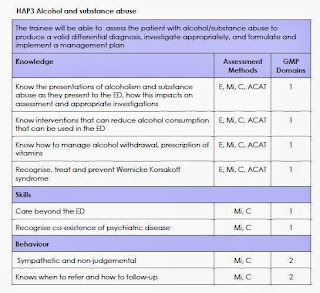 Alcohol and substance abuse has its own separate curricular component in HST. Core training integrated alcohol into most of the individual components.

In York:
- 18% of all ambulance journeys were due to alcohol
- 9.8% of attendances were alcohol-related (553 patients)
- Between 21:00 and 09:00, this rose to 19.7%
- Alcohol was involved in 45% of mental health attendances
- The alcohol group was heavily over-represented in the patients removed by police (100%), refusing treatment (55%) and leaving prior to their treatment (41%)
- 10.3% of alcohol-related attendees remained in the ED for >4hours compared with 5.9% of non-alcohol-related attendees

In Northern Ireland:
- Alcohol misuse was a factor in 60% of patient suicides
- Become more common over the past 10 years.
- Alcohol a factor in 70% of suicides of young people known to mental health services.
- Alcohol dependence was also the most common clinical diagnosis in patients convicted of homicide, with more than half known to have a problem prior to conviction.
- In homicide and suicide generally, alcohol misuse was a more common feature in Northern Ireland than in the other UK countries

Simple withdrawal
This has a short duration of one to four days and is associated with nausea, tremors, anxiety, sweating, and seizures.

Complex withdrawal
This can sometimes last up to nine or 10 days. Symptoms and signs of complex withdrawal are more severe. It is associated with confusion, hallucinations, paranoia, and delirium tremens.

Delirium Tremens
- 50% will develop the symptoms within 46 hours
- 90% within 85 hours of admission to hospital.
- occurs in 20% of patients with alcohol withdrawal
- without treatment lasts 72 hours, and kills 15 - 20% of patients.

Higher Risk Patients include:
Are over 70 years old
Need invasive or non-invasive ventilation
Present with seizures on admission
Are admitted to hospital with other complications, for example cerebral injury or hypoxia
Have a delay of more than 24 hours prior to treatment.

Signs and symptoms of DT
Excessive sweating
Profound agitation
A fever greater than 38.5°C
Tachycardia - a heart rate of greater than 100 beats a minute.

Investigations
I can't find the evidence for this, but there is a suggestion we should do a full biochemical screen on all patients presenting with alcohol withdrawal:
Blood glucose
Full blood count
Urea and electrolytes
Magnesium
Clotting screen
Liver function tests.
Refer to gastro if suspected ALD - may need USS

Treatment
Reduce sensory deprivation and treat the patient as you would normal delirium - manage in a side room, supportive care with supportive nursing staff, reassure the patient, regular observation.

Thiamine to all patients with actual or suspected alcohol dependence.
Posted by Cheerful Elephant at 03:39